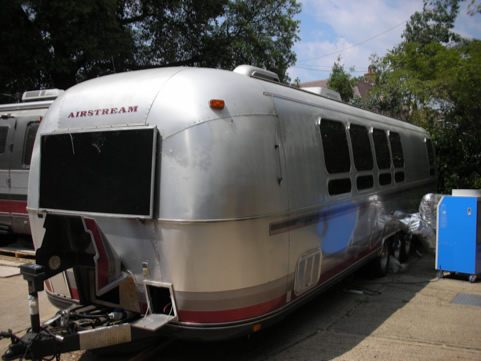 Eel Pie Recording Studios had acquired a beautiful Airstream trailer and urgently needed to make it both acoustically and visually perfect for recording and broadcasting purposes.  They contacted Ace Acoustics and asked if it were possible to install the renowned Whisper Walls acoustic panels inside the trailer and also, of course, the cost of doing so.

The Airstream trailer, otherwise known as a ‘Silver Bullet’ is well named and entirely streamlined and beautifully curved on both the outside and inside. Pete Townshend of ‘The Who’, as a recording & broadcast studio and, of course, intended this one for use for extensive touring purposes. The Client told us that they wanted high-quality fabric to cover the acoustic panels all the way around the inside and on both sides of a partition wall, including the actual soundproof door, which separates the internal studio from its control room.

Eel Pie were very honest and told us that they had a very disappointing result when they earlier talked to another stretched-fabric company:  after a site survey, this company advised them that they could not effectively proceed as briefed since the wall interiors would have to be ‘squared off’:  this was because they were unable to follow the natural curves of the trailer’s interior.

One of our special skills at Ace Acoustics – and one we are very proud of - is that, when installing acoustic panels, we often have to cope with eccentric designs, irregular surfaces, difficult contours and sometimes really bizarre internal geometries.  So, after our survey, we told the Client that we could meet their brief with ease and that we were very excited about the whole project: our estimated price for doing so was quickly accepted and once the contract was signed we moved ahead extremely rapidly.

Because it was a particularly urgent project, we often had to work late into the night and this was very much appreciated by the client team and particularly by Pete Townshend, who came in, more than once, to thank the Ace Acoustics team personally.

On completion, the studio told us that they were delighted with the white fabric finish, the speed of the work and the overall acoustic efficiency and stunning appearance of the Whisper Walls contoured acoustic panelling.

Acoustic Panels, in Absorber Class ‘A’

Because of the growing pressure on many budgets, which is becoming increasingly restrictive, and particularly so throughout the education sector, the installation of specially engineered lower cost panels could well help solve the problems created by financial belt-tightening and cut-backs generally.

These optimum-engineered (O.E) panels have been successfully installed and are working effectively in locations as diverse as hospitals, concert halls, libraries and prisons. But it is in educational establishments particularly that O.E. panels are becoming an increasingly popular choice and, as you will see below, their warranted performance, flexibility, ease of installation and overall quality combine to make their use a highly effective alternative to Whisper Walls panels. 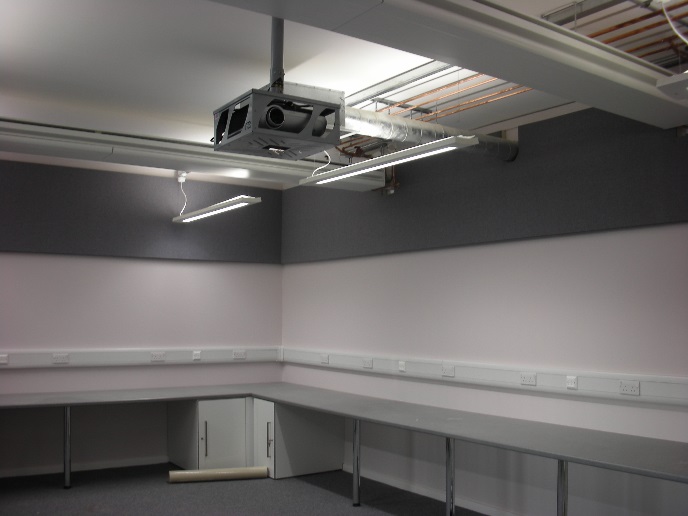 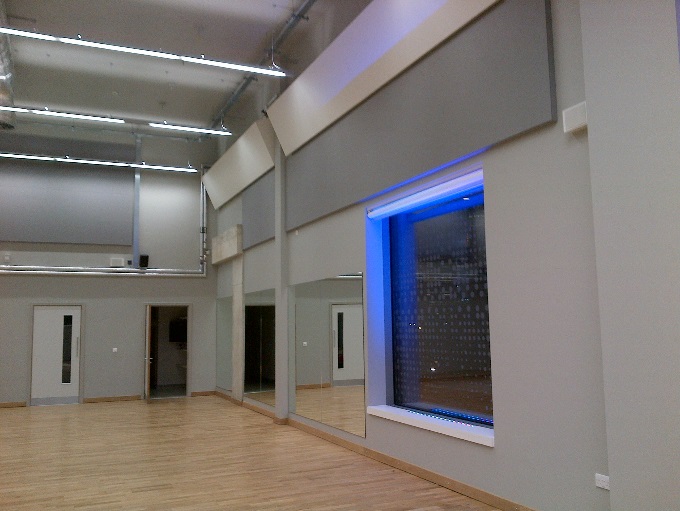 Supplied & Installed throughout the UK & Ireland in: 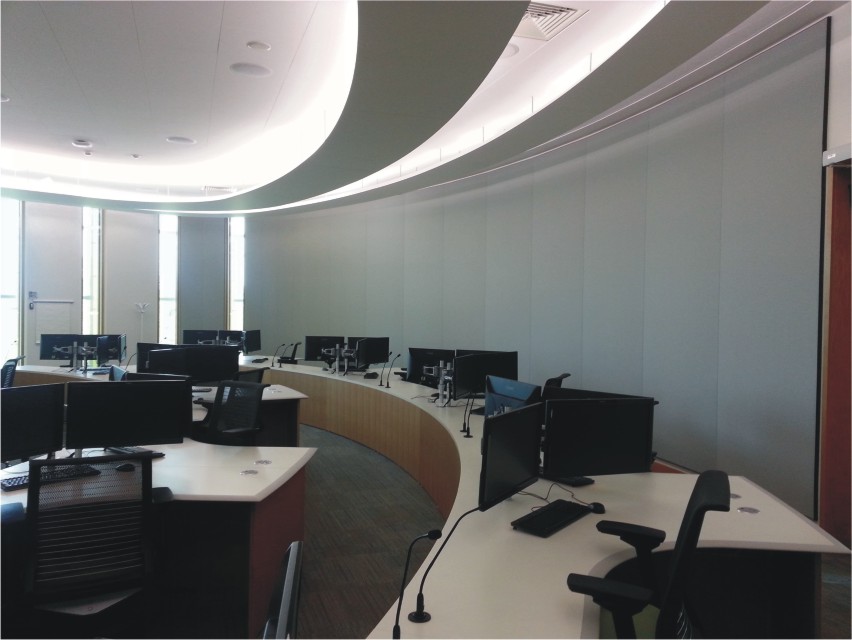 Horohoe Construction first contacted Ace Acoustics when they began to experience serious problems at one of their major projects, BP’s Upstream Learning Centre in Sunbury.

The trouble concerned the recent installation of pre-manufactured wall panels and as soon as we saw these, it immediately became very clear that the panel corners were not aligned properly.  This was because the underlying wall surfaces were pretty uneven and the supplier concerned had not taken sufficient care to allow for this:  It’s not an unusual problem and is one we encounter quite often.

Fortunately, only one rectangular classroom had been fitted and the immediate solution was to remove the panels before the distortion became more evident.

During the same site visit, we saw classrooms with curved walls where panelling was to be installed and we immediately advised that pre-manufactured wall panels would be extremely difficult to install, would not be aesthetically pleasing and would be entirely unacceptable, an opinion the Client readily endorsed.

Once we had shown Horohoe and BP the detail of our components, together with newly drafted CAD drawings illustrating how the Whisper Walls® system may be built up, we were asked to quote for all the classrooms, and completing the planned installation for this large project.  We offered our standard 5-year limited warranty for labour & materials, covering the required ‘tailor-made’ fabrication and the Client was happy with this and followed through with a firm order. 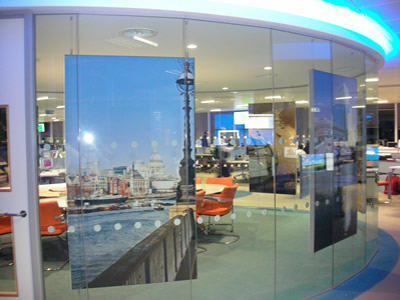 If flood damage occurs in London, this room is essentially the control room and is used to plan strategies, propose actions and generally manage and supervise the Company’s reaction to such events.

The Problem
Because viewing events both outside and inside, was essential, it had to be a glass room to maximise visibility all round. The downside of this was that any glass room would suffer from a huge reverberation problem, one which in this case, virtually nullified the clarity of vital communications, both internal and external.  So Itineri found themselves seeking a solution that would allow for the unusual shape of the room and, at the same time, solve the intrusive reverberation and sound distortion problems.

Ace Acoustics were called in and we suggested that a number of efficient sound-absorbent baffles should be installed, would be suspended from the ceiling and anchored to the floor (with aircraft cable) and placed in key positions around the room. As these baffles were visible from both inside and outside the room, we offered a selection of digital photographic images to feature on both sides of each panel.

Thames Water responded enthusiastically to this proposal and gave us the green light immediately. They have told us that they are very pleased with both the acoustic solution and the aesthetic appearance of the whole room and so are delighted with the overall result.

Ace Acoustics (UK) specialise in noise & reverberation reduction together with total sound management in all kinds of internal environments.

The benefits of good aural design are well established and, when sound becomes simply noise, noise becomes a problem.